A blog to catalog some minor grievances
in the products we all know and love.

Chrome and Firefox: The over-reaching About box

An interesting thing is happening to the venerable "About" box found in most applications. Mozilla Firefox and Google Chrome (at least certain versions; I think it's limited to the developer/beta editions for now) support checking and updating themselves from their About box. 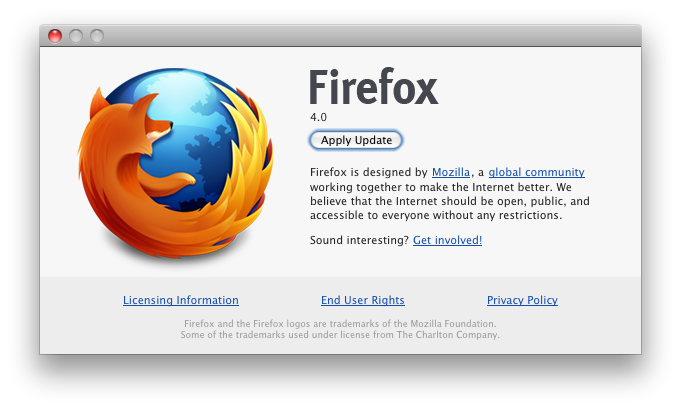 I'm not sure this is a good thing.

I'm certain the motivation behind this is the legacy of Internet Explorer 6. IE6 was introduced to the world over ten years ago. And yet, there are still significant numbers of people using it today (particularly in China and South Korea). Sometimes, even if something is broken, people won't fix it even if fixing it is relatively easy and free. Or, perhaps they just don't know how. After all, IE6 was the default browser for Windows XP.

So, it seems the solution is to put the upgrade process right in the "About" window. Why... better yet: make it auto-update itself (Firefox 3 began auto-updating itself with minor updates — they install the next time you re-launch the browser). Remove the choice from the user to click the button to upgrade, and everything will be fine! Well, that may be an acceptable default choice for many users, but not everyone.

Personally, I'm growing more fond of Apple's App Store model — the applications you download through the store are updated through the App Store too. Instead of replicating the software update process into each and every app, it is handled by one application and the user has full control over which applications they update, and when the updates are done. And best of all, you can update several applications at once. Can you imagine if we were stuck with the old model on our phones? Where you'd have to download installation files or check for updates within each application? That would drive me nuts. The speed and simplicity of letting a software manager (App Store or whatever) manage updates for each managed application is THE FUTURE. Lets get there for our PCs/Macs too.

Until we do get there — to Google, Mozilla and other application developers who will follow their lead to remove this choice: please consider the users that would rather opt-out and would prefer to choose when to upgrade an application they use daily.